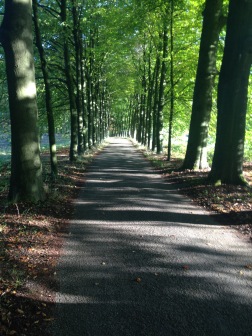 It was Halloween and we arrived at our friends’ house in Arnhem, we placed the two eyeballs on the front porch and rang the doorbell…. may I remind you that we are in fact slightly older than the normal 8 year old trick and treater.

We hid around the corner, heard the door open and I am sure our friend J called us wankers… Undeterred Mr JCR rang the bell again and we had to explain that there were two eyeballs on the ground. Epic fail on trick or treating – I think now we need to grow up a little. Then followed a very nice evening, food eaten, drinks drunk, and plans made for the next few days.

Next morning, I am not so quite bright and beautiful, nor early, but that was normal, we had travelled many miles and had a late night. Up and out to Arnhem, to do some runner shopping. In fact two pairs of trainers, two running tops, socks and pair of thermal running tights later, we returned to our friends for lunch and another glorious dinner with wine and cheese and wine and cake and so on. Also a small matter of meeting the PR lady from the ALS association in Holland to discuss our 2020 fund raising plan. More of that on a dedicated post another time…, as it warrants a lot of explanation and its own airtime.

So this morning, after having asked the Health Unlocked crew which trainers I should try for my run, it was a unanimous vote for the marine blue and citron Saucony.

Our friend G very kindly showed me where to run, as I am notorious for having little/no sense of direction. It all looked fine, I wanted to run for about 5k to run in the new trainers and be careful because of recent stupid tart syndrome injuries. The marine blue flashed in the sunlight and I ran down the tree lined avenue into a glorious parkland, met by many dog walkers, some walkers and  couple of cyclists. I did have a small flash of worry when I saw a lone man walking towards me with his dog, but when he got closer I reckoned I could outrun him anyway. Poor man, he had no idea that when he was out walking his pooch, a random English runner was looking at him sizing him up to see if she could outrun him in the case of him attacking her. The run was slow, getting used to new trainers and  trail terrain meant I didn’t feel very confident to belt along, but it was a lovely day, my trainers were fine and as you see the view of the trail was fantastic. The Boss chimed up “ I took a wrong turn and I just kept going” which was what I did next. My scheduled run route was supposed to be at a close but I was nowhere near my target 5k so I kept going until I hit 6, in my sexy Sauconys.

I got home and relayed my run to our friend G who said it was a great place to run especially for single females as it’s  very safe. So I felt really happy, then G follows it up with “ but there was one time when J (his wife) was running and thought she saw a naked man in the forest. It was summer, she blinked and looked again and sure enough it was a naked man. So she turned and ran away as fast as she could”. That surely is a way of getting a PB!

I had always read a lot about naked running, but I thought it meant running without music or any distractions, now I know it means (in Holland) that you truly run butt-naked…

Distance 6.87km but only 6 running