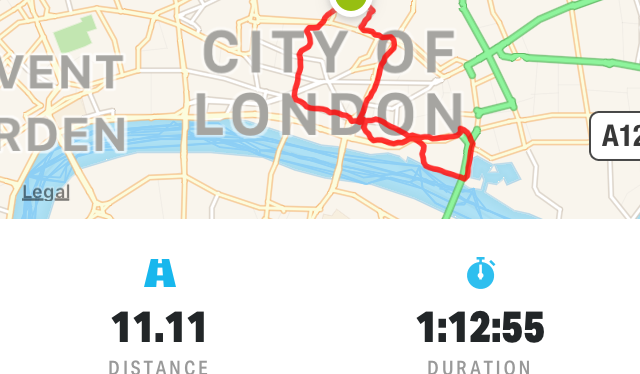 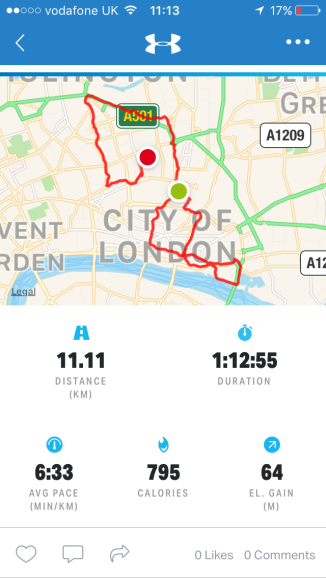 It is Armistice Sunday and about 8amish, Mr JCR is in a tailspin, this time he was re-enacting the opening scene in Four Weddings and a Funeral, he had set his alarm to get up and out for a ride, meeting his fellow cyclists at a park in North London. It seems there was a technical failure between his head and the phone, and thus no alarm. Lots of frantic running around ensued, by a swift espresso (him) a kiss good bye (him to me) then a nice snuggle under the duvet (me). The great thing about being a runner is unless you’re on an organised gig, then you can just go out when you choose. So I chose not to get up, but snuggle down and read the C25K Forum posts, because lots of plucky folk are doing the poppy runs today.

One mug of tea later, I finally surfaced and started getting out the running layers, we’d been warned today was going to be colder, so I tiptoed onto the balcony (please don’t get any ideas of grandeur here, it’s all of about 2 feet wide…) in my jammies, and yup it’s brass monkey weather.

I had set myself a goal of doing my third 10K run today, but yesterday whilst walking I could feel my right hamstring pulling a bit, so was unsure if I’d be okay. Still nothing ventured…

Appropriately dressed like a ninja, all black with just a hint of fluoro today, I donned my sexy Saucony’s and gasped as the air cut through. I was glad of my hat and gloves, started my warm off walk towards the City. I love running through the City at the weekend, because it’s usually so quiet compared to during the week and it’s like a secret place, where not many folk venture. But of course today is different, I passed many roadblocks and policemen with sub-machine guns, but far more encouragingly loads and loads of folk wearing their poppies with pride, some formally dressed in overcoats, shirts and ties, some with medals, some not. It wasn’t quite the sea of poppies that the Tower of London had a couple of years back, but still a lovely sight.

I ran towards the Tower and it was very very busy, so I hightailed it back to the City, after needing to strip off the jacket, hat and gloves as I was getting a bit warm. Running along Tower Hill, ‘fag ash Lil’ as she shall be known,  turned around from admiring the Trinity Square Gardens and tipped her fag ash over my leg, as I was running past. She did look somewhat sheepish afterwards and on a positive note at least she didn’t try to stub it out on me.

I continued back to the City, along Eastcheap – even more policemen, more road blocks and more sub-machine guns. Did a quick whizz along Cannon Street and headed towards the Guildhall – from a distance it had many flags hanging in the courtyard and barriers around. So I asked  a very nice young policeman if it was okay to run there, and he said yes there was no activity there today. It certainly is true when policemen all look young, you know you’re old….

At this point, it suddenly occurred to me that actually rather than just do the 10k today, I should try and do 11K, before 11am. My own mini tribute. I continued on into the City, past my old office no problem at all, past the Modern Pantry restaurant – much harder! – they do mean cocktails for Sunday mornings, and I have to say a cocktail would have been very welcome at that point. Continued up and past Moorfields Eye Hospital and up the City Road, coming in the opposite direction a sassy dude. We ‘met’ at a road junction and just as The Supremes were starting Nathan Jones, he crossed the road by doing a pirouette in the middle – obviously a Strictly fan!

Up to Angel Islington, and back down St John Street – I passed a few fellow runners here, some nods and smiles and I continued on towards Smithfield Market, overtaking a Liam Gallagher lookalike. Running through the ‘Top Gear’ tunnel, I noticed that loads of folk were taking selfies in front of the newest Banksy – it appeared I think on Friday night. This one is painted on acetate, so maybe he’s making them portable now? Just after hitting the 10k mark, I did  a wider loop to finish at our local coffee shop ‘Fix’ in Whitecross Street and at about 10.50am on Armistice Sunday, I clocked 11.11km – spooky!

Well done to all the poppy runners today, I promise to be in your number next year.

Andy, You’re A Star – The Killers

Poppies – too many to count, but enough to appreciate

One thought on “New Banksy in Town – 12 November”