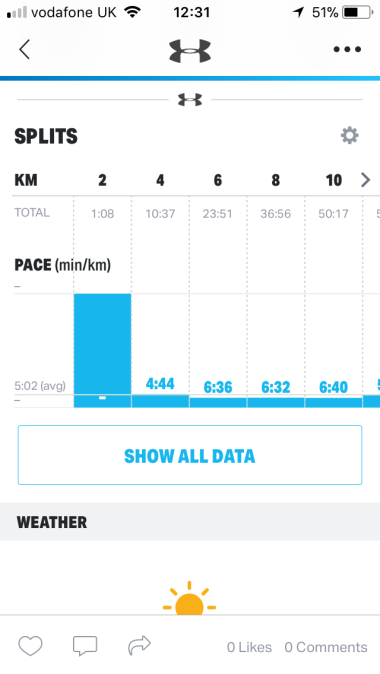 We had words, did Mr JCR and me…, big words, tetchy words, me wanting to quit the relationship, him wanting to try just one more time. And to be honest I was surprised as he hadn’t shown much favour up until now.

It’s no use I told him, things have changed, the old model worked but the new model doesn’t. I can’t carry on in this vein any longer, ‘let me try’ he pleaded. ‘No’ I said. But a few days away, and a sense of hope surged. ‘Okay, we can give it a go’.

Mr JCR had asked me to go counselling. Relate are famous for helping couples work through relationship issues and Mr JCR thought it was worth a shot. We’ve been together for nigh on 25 years, so he had a point. One night just before coming home to London, we made an appointment. Grievances duly noted, with specific examples so that the advice stood a chance. And so the dialogue began.

Mr JCR – ‘Exactly what isn’t working from your perspective?’

JCR – ‘Well, the new iPhone and Map my Run, still won’t synchronise to my iTunes library, it says I have no music and I have’

Mr JCR is the techy whizz kid in our household and following my switch to the new iPhone, things were not going well. The Map My Run App was hopeless, no longer picking up my music, nor tracking my route at one point. Mr JCR often persuades me to move to Strava, but it doesn’t synch to my music either, and so he said before `I committed to another app he’d have a look and see what he could do. Mr JCR duly looked and configured bits and pieces and lo and behold a miracle – he got the music link working. It then seemed from a mini test (by running around the living room) that everything was working. So, today, naturally enough I set out with hope in my heart and a spring in my step.

Okay,  I am out of the door, with the warm-up walk started, Mechanical Voice Lady is present and the countdown is working fine, I can hear my music, so far so good. At the end of the five minute warm up, Mechanical Voice Lady tells me to start exercising, and I do. Somewhat surprisingly my first kilometre was completed in 30 seconds, with my second one done similarly. Harrumpphh, this intervention by RELATE has fixed one problem, but obviously there are a few more. As much as I’d love to report a miraculous mix of Usain’s speed with Mo Farah’s distance, let’s be realistic, I am middle aged, a bit chunkier than I was pre-Christmas and my running took a bit a of a break over the festive period.

I head up towards Islington and Essex Road, avoiding the crowds on Upper Street, all of them still hunting for that elusive New Year Sale bargain. My pace is quite steady I think, although with MMR marking my times, the Olympics won’t be far away for me. I am dodging quite a few bare, unadorned Christmas trees, now sadly deserted by their owners and forming a mini hurdle and obstacle race on the pavements. But as The Boss is singing Born To Run, I am smiling widely as I dodge each one. I reach the end of Essex Road and turn right along Balls Pond Road. I had thought on a Sunday morning that the roads would be quiet, but I was wrong and the pong of petrol pollution still hangs around. I do wonder whether running in these parts is quite so healthy…, then I am overtaken by a braver running lady  in a short sleeved tee-shirt, with a sort of semi circular sweep to her running gait and it occurs to me that she must be covering more distance per step than me, because her feet are covering quite a bit of the pavement on each step, it’s quite fascinating to watch, if a bit dangerous as I then trip slightly on a paving slab.

I continue down Balls Pond Road and am overtaken again by a lazy, loper runner. I don’t mean he was lazy, but his running style was all loose and loping and fast too. He scooted in the distance and I was at about 6km at this stage, so no chance of catching him up. I then turn into Kingsland Road (Dalston) one of the spiritual homes of the fable Hoxton Hipster and yes there was my first one  .

Beard – yup, checked lumberjack shirt thing – yup, dark denim narrow jeans – yup, natty bit of ankle showing – yup, and brogue shoes – yup. I was so intent on looking at him for my stereotype bingo card, that I almost barged into a young girl coming the other way. She moved out of my way and I did say thank you, well I wheezed thank you as I was at about 7.5km at this point.

The people were thinning out now, as I am aiming towards Bishopsgate and the City, the tower blocks loom and I run past Liverpool Street Station, with throngs of people leaving there and queueing for buses and couches; a tangle of limbs and luggage. I turn off to Threadneedle Street which is nice and quiet, past Royal Exchange and Lothbury and towards Basinghall Street and home. My 10km warning comes up close to home, so I continue just that bit further, but to be honest I am tired and now running like Mrs Overall from Acorn Antiques. When that running style happens, I know it’s time to quit, so I push the pause and hold button on Map My Run and that does at least work.

I was musing as I ran about my upcoming divorce from Map My Run, and wondered which religion it was that permitted you to divorce by saying ‘ I divorce thee’ three times. It is in the Islam faith, although a triple ‘talaq’ does not actually confer the right of divorce. There’s a time gap of one month between the saying of the words and also a requirement that the couple seek counselling and try to come to an amicable reconciliation before pursuing the finalisation of divorce.  Following that logic, that means me and Map My Run have to have another couple of reconciliation attempts, before I give in. I wonder if Mr JCR has some spare time for the next phase of R.E.L.A.T.E.?

I whimper as I think of yet more techy stuff to be done, but lucky me – Mr JCR is a whizz with this so I am sure we will get there. And the reason why this is important to me – this year I commit to running for Alzheimer’s and am challenging myself to run 2018 kms  in 2018 and fund raise. More of that to come later, once I’ve set up my fund raising site etc. That means doubling my rate of kms and the first week of January I am already 27kms down…. much work to be done JCR!

Dancing In The Dark – ditto

Born In The USA – ditto

Dreaming Of Me – Depeche Mode

(It seems my playlist played alphabetically – hey ho, but it did say the music was playing for 1 hour 5 minutes and 56 seconds which is probably accurate for my timing)

Distance 10.35km (I do hope so but the MMR running route isn’t quite right)

Average Pace 5.02 mins/km (if the music list time is correct, then my pace was 6 mins 22.2 per kilometre which seems more accurate)

Stereotype Bingo – 1 for the Hoxton Hipster