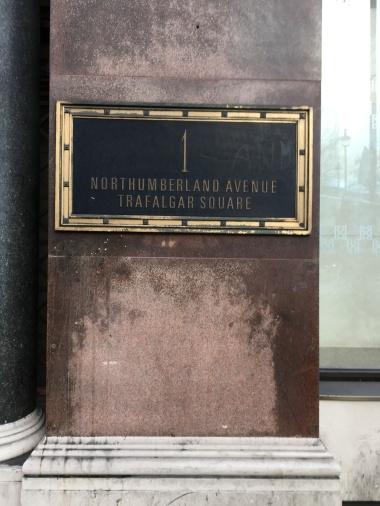 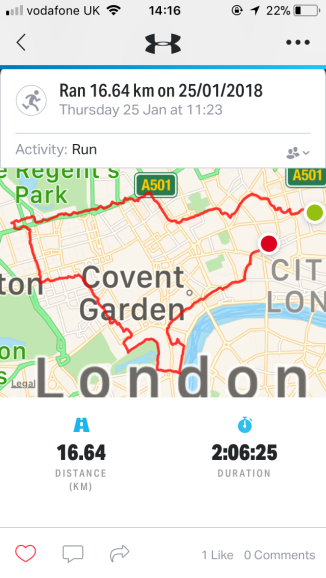 Part Three of my Monopoly Board challenge. Today I was to do the final pale blue square of Euston Road and then the three pinks of Whitehall, Pall Mall, and Northumberland Avenue, but I spotted an opportunity to get Marylebone Station too. Then by donning my smart arse hat, looked up on Dr Google to see if I could find an Electric Company – he reliably informed me that I could find a certain Electricity Supplier at 333 Euston Road.

‘Jolly Good’ and off I went in search of my pale blue Euston Road, wearing my new glorious Lululemon dark blue base layer. From Barbican to Euston Road isn’t the most edifying of sights, so I spent time in the back streets, trying to keep away from traffic and my plan was to take a photo of the Electric Company at 333 Euston Road. Except that 333 Euston Road, is no longer an Electric Company it appears to be a kebab shop. Except even the kebab shop is now closed. Obviously not an auspicious site for businesses… but it did get me my last of the pale blue squares. I will have to look for an Electric Company on another day. Then a quick detour up beyond Great Portland Street, Warren Street and Baker Street, to snap Marylebone Station. Great, that is all 4 stations done.

Now onto Pall Mall and the rest of the pinks. Aiming towards Oxford Street and New Bond Street heading off towards Piccadilly it was rather congested and the Dr Google’s famous maps app, wasn’t keeping up very well. This was a bit frustrating, because I’d specifically mapped out a route to make sure I did my first 15km run, so whilst I didn’t need the directions to know where to go, I did need the directions to take me through various ‘longcuts’ (routes which take a longer way to my destination). Cue lots of swearing and intermittent stopping to check out the damned app, to see where I was supposed to head even though he (Dr Google) was about 5 minutes behind me. Crossing Horseguards, I eventually swore out loud at Dr Google ‘FFS’ unfortunately I was quite close to a well dressed man who turned and looked; I did grimace and move away somewhat embarrassed.

Cue a whole set of pics, as once I’d snapped the Nell Gwynne connection on Pall Mall, Whitehall and Northumberland Avenue came up in quick succession. Fantastic  – I’d done what I set out to do Monopoly Board wise, but was still adrift of my 15km target, so couldn’t rest on my laurels. I was aiming for 15km today because as part of my Alzheimer’s challenge to run 2018kms in 2018, I also wanted to 15km done prior to the end of January.  As we are away for a couple of days, it really had to be this week or not at all. Secondly, after Erin at Lululemon had given me my new base layer as an encouragement to get the 15km completed, it had been winking at me for a couple of days, nagging me to get out there.

I headed off down the Strand, past the Royal Courts of Justice, lots and lots of lawyers around the place, then up Fetter Lane towards home. By now my little legs had got somewhat slower and my Mrs Overall running style had made an appearance. Whenever Mrs Overall appears, I need to stop, so I did. And that was 16.64km in the bag. Thanks Erin, your freebie encouragement worked! So I am very much tickled pink to have done the pinks and the blue and 15km+ too.

Push The Button – The Sugababes – twice

Sweet Dreams (are made of this ) – Eurythmics

Cake By The Ocean – DNCE – twice

I’m The Fat Man – King Pleasure and The Biscuit Boys

You Got The Love – The Source and Candi Staton – 3 times

(this was from my Retro Runners, Sweetie Playlist on Spotify, in hindsight not enough tracks for a 2 hour run!)

Sorries – 3 ( I kept bumping into people)

Next time – the Oranges.