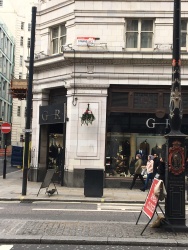 Simpsons On The Strand 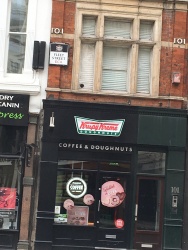 It had been quite a while since me and Mr Smooth had hooked up, but as I had his date reminder, telling me to get my trainers on and run, I thought I’d take him for a day out today. I’d forgotten just how blissful Mr Smooth’s voice was, from telling me that I had done well and he was sure I could make it, to him suggesting a warm up walk would be in order. Lovely.

All of which are rather conveniently located in a line, from the east of the City to the prime West End. Heading towards south Smithfield Market, the traffic was backed up – this is really unusual on a Sunday morning. I made my way to Farringdon Road and yup all snarled up. Turning off into Fleet Street (yes one red square done and less than a km from home!), I passed the first of a number of Harry Potter afficianados.

Your first one is always the best and he had the hat, scarf, hoodie and bag. I’d seen the bags and hats and scarves previously, but not the hoodie, oh and of course it was in Gryffindor colours, which I’m guessing must out-sell the other houses by about 10 to 1.

Crossing Fleet Street aiming towards the Strand, another Gryffindor hat espied and an awful lot of barriers being erected down the length of the Strand. Took my pics of Simpsons on the Strand and the road sign and on I went.

Hitting Trafalgar Square where even more barriers were being erected and Magic FM were broadcasting. Ah yes, I had forgotten today is The Winter Run in aid of Cancer Research. I couldn’t get in this year when I found out about it, the entry spaces had gone unless you were bringing sponsorship, and with the Alzheimer’s Challenge I  already have on my plate, I decided I’d try and do the Winter Run next year. And behind the newly erected barriers, a street artist had chalked the Monopoly Board.

Feeling a bit embarrassed being a non Winter Run runner – it felt like being an unwanted guest at a wedding party,  so I slipped out of the back of Trafalgar Square, to avoid all the folks with their Winter Run bags.

Final Gryffindor clothing seen, a scarf in red and gold – not entirely sure it was official merchandise, but it was definitely house colours. Mr Smooth was telling me I had one minute left to have run solidly for 30 minutes. And although he gave me permission to walk, I hadn’t quite done 5km yet, so I continued.

I headed home towards Lincolns Inn Fields and passed the Sir John Soanes’ Museum, where the lady ticket seller, shouted encouragingly at me to keep going and not give up. I hope to goodness she didn’t think I was one of the Winter Run runners, although I didn’t see any sign of the run nearby.

Just on the 6km mark, I was headed back towards Smithfield and crossing a blocked road, when a little boy of about 6/7 said to his parents (also crossing) – ‘that lady is running very slowly’. Now he wasn’t lying, I was. But it is rather humiliating to have it pointed out so publicly – his mum told him to ssshhh. With my arsey Liverpudlian mood on, I felt sorely tempted to flick him the bird. But then common sense reasserted itself and I decided that running slowly will get me my challenge done. Sprinting like Usain won’t.  I did give him a mental V sign though… 😉

Slow running with Mr Smooth kept me going and we got all three red squares today.

All She Wants Is – Ditto

(there was something weird going on, because when I reached Trafalgar Square Magic Fm played Rio by Duran Duran, and this coincided with my ‘shuffled’ Duran Duran episode)

I Can’t Stand Up – Elvis Costello & The Attractions

Somewhere In My Heart – Aztec Camera

Save a Prayer – Duran Duran

Every Breath You Take – The Police