complaining about the weather. Snow good wishing it wasn’t snowing. Snow time like the present. And the puns keep rolling.

Last day of February and a planned 8km run. Mr JCR came up with a good idea to try running in/around one of the Royal Parks as they are far more likely to be well managed in bad weather. I say it was a good idea, and it was, although at the time it was mooted – in my head I was screaming ‘you’ve got to be joking, running in this!’

So off I trotted, bearing a distinct resemblance to the Michelin man with four layers on top, three layers on the bottom, two pairs of socks a hat, gloves, running buff oh and the essential 10 tissues for the ever present runny nose. I caught the train to Great Portland Street tube and exited to a mini blizzard. The pavements hadn’t been gritted and were quite slippy, so I wasn’t entirely sure that it would be safe to run.

But then I found that the pavements around the park were fine, because no grit and no pedestrians meant almost virgin snow, which is grippy enough to run on, although your pace suffers a bit. So I plodded around, and slight confession here, I just thought I’d follow whichever road I was on. And it turned out it was the inner circle road which apparently I circumnavigated three times.  Here’s the thing I had no idea I had done that. I must admit to being confused at seeing a place called ‘The Holme’ on three occasions, but I thought that maybe the park had a number of lodges all called the same thing. Truthfully it’s a good job I’m not let out on my own very often, I really couldn’t find my way out of a cul de sac. 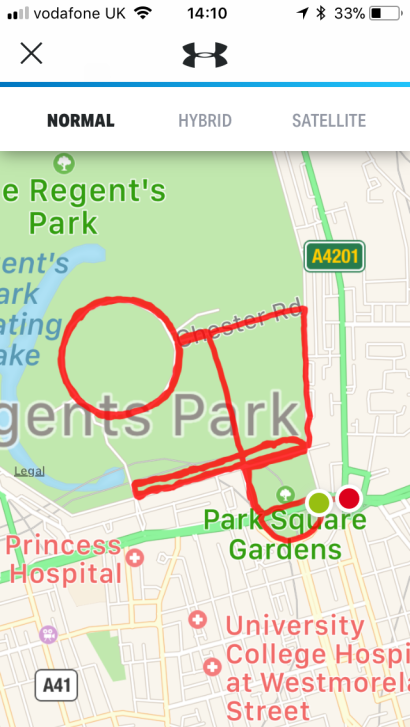 I carried on and I was really enjoying it, there’s a kind of muffled silence that comes with snow; the roar of traffic from the Marylebone Road,  was just a very distant hum and the park itself, magically tranquil. A guy asked me to take a photo of him against the snow because he couldn’t believe there was that much in London.

After about 5/6 kms the park started filling up with people, some with children and most of them not, but it didn’t stop a number of snowball fights from happening. No snowflakey bans on snowballs here. And the funniest sight of all, was some twenty-something lads looking like they were re-enacting The ‘Big Air’ finals from the Olympics with all sorts of acrobatics, just without skis or a snowboard.

At this point the pathway was becoming a little more slushy underfoot and I decided to call it quits before I undertook an unplanned ‘Big Air’ moment. Who knew that running in the snow would be so lovely?  I didn’t. Snow excuses, next time – I will be straight out the door heading for Regents Park again.

Something In The Air – Thunderclap Newman

Thunder In My Heart – Meck and Leo Sayer

Since You’ve Been Gone – Rainbow

Sunshine After The Rain – Berri

Sunshine On A Rainy Day – Galimar

I should have done 4 sets of reps of squats and press-ups yesterday. I actually managed 3 sets of 7 reps of squats with 2 sets of 10 reps of wall press-ups. All the attention we were told was to be on ‘maintaining form’ and the best way to do this is to self video.

I don’t know how you insert a video camera between you and a wall, so I didn’t.