Unlike the actual board game, my last  Monopoly square run had to be utilities and the ‘gas’ company, as I’d not come across any in my previous Monopoly runs.  The only option seemed to be the old fashioned gas tanks/holders, that used to be a common sight around London. The two I could remember on Regents Canal are no more and so the  nearest equivalent was the newly created Gasholder Park in Kings Cross, in which some luxury apartment blocks are being framed by the renovated old gas holders. 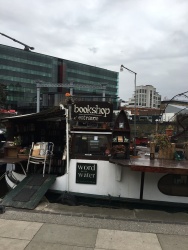 Bookshop on the canal 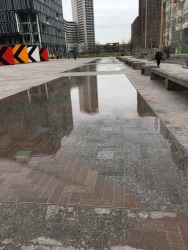 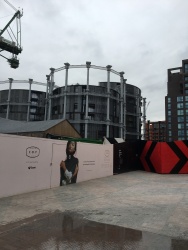 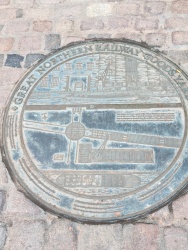 A window on history

Please pardon the pun, this was a utility run, all about getting the ‘square’ done and doing 10km if I could. Having had a rest day yesterday, I needed to be putting in a good run, as we have another short break in Spain coming up. This time to the Alhambra in Granada, with our very good friends N&A. I’m sure they won’t want to be waiting for me to run every day, so I am trying to get a few kms in the bank, before we go.

Coldish, grey day today and from the City to Kings Cross, not the most salubrious nor enjoyable of routes, despite the ongoing gentrification of the area.

Run done, fish collected and yet another 3km run home carrying fish – my fishmonger Robby is utterly perplexed at the madness of it, and he asked ‘do you think you are getting any fitter?’ to which I replied that I hoped so. But maybe my very red face on entering the shop, is suggesting otherwise.

Everything Must Go – Manic Street Preachers

By The Way – Red Hot Chilis

Is She Really Going Out With Him – Joe Jackson

Except then I read on and it was repeat 3 times.