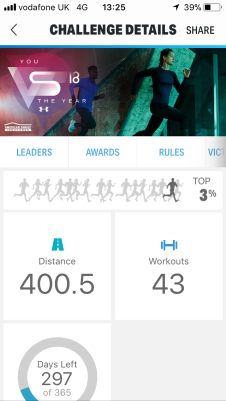 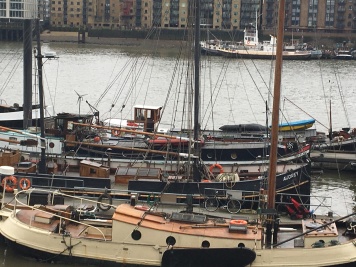 I had a job to do, to get to 400km this weekend if I could by Sunday night. Being tech savvy now, I had plotted a route to take me on a circular route that according to the route wizard would match the km limit specified. I’d identified 17km as being possible (although unlikely).

This morning I opened up the route which for some reason seemed to have morphed into a 25km run. Okay not so tech savvy then…

I decided to run freestyle. Having had lots of wintery runs, I actually felt Spring was on its way, as the running jacket was opened up at the 2km mark. Going towards the Tower of London, loads and loads of tourists there – I continued to Wapping to the Narrow pub – just as a milestone. Unfortunately, I got slightly distracted and paused my phone when in St Katherine’s Dock for the inevitable middle aged lady nose blowing, so my distance and timing stats were all over the place – I’d apparently run a 2minute km at one stage. The distance was estimated but I was wiggling around Wapping and the phone straightened my run – so I think I ran more than recorded. Hey ho, definitely not tech savvy me…

At the Narrow pub, I started a new run to come home and it occurred to me that if I could just hold on a bit, I might be able to make the 400km mark in today’s run. I came across 2 Ross Kemp lookalikes – walking in tandem exactly like the Hofmeister bear adverts. A bit of a Cockney roll to their walk. My run was somewhat more laboured, but I held on and around the Barbican area, realised if I did a  quick detour, I could probably do the 400km mark. And I did,  by a sneaky, tiny margin of 0.5km but it all counts.

Off The Wall – Michael Jackson

Be Young, Be Foolish, Be Happy – The Tams

Ain’t No Stopping Us Now –  Jimmy James & The Vagabonds

The Only Way Is Up – Yazz

You Spin Me Round – Dead Or Alive

Get Dancin’ – Disco Tex & His Sex-O-Lettes

She Sells Sanctuary – The Cult

Do You Really Want To Hurt Me – Culture Club