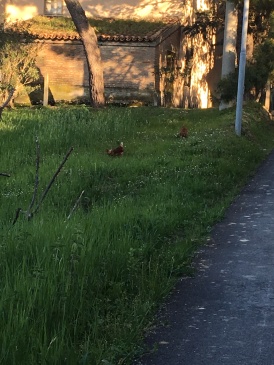 Why did the chicken cross the road?

The wine is growing!

are kept. I know, who knew that was possible?

Our very good friends K&C passed by, having spent a few days in Abruzzo on their way back home to Northern Italy.

Today is a special day, an historic day, as we say in Italiano ‘irrepetibile’  for the K&C family and Mr & Mrs JCR. Today, we lunched both well and wisely. We ate, and we drank water, lots of water, followed by water.

Usually our lunches start with a snifter, or two, followed by a bottle of vino or two, and the vino gets followed by a digestivo, then lunch morphs into dinner, evening snifters, nightcaps. You get the drift. Usually a lunch invitation involves an overnight stay and a drying out day. For goodness sake, we even have wine vines growing in our garden, which are coming on a treat. Still we stayed vino free.

Today is however different for a number of reasons:-

To my shame, I did suggest a white wine spritzer, but was shouted down most politely by the other three.  So we lunched well, and wisely. Which perhaps was all to the good, when I set out for my little run this afternoon. My feet resemble a battleground and various plasters and ointments are being brought into service, to get me round. After yesterday’s long run of 12km, I decided a short, cheeky six clicks, would be just the ticket.

I set out to Seal’s ‘The Beginning’, down the Slope of Hope, past the barking balcony house – they were quiet today. Up the Hill That Kills, and to be honest it did a damn fine job of having a go at me. I have to admit to one stop, I was pooped and hot and yes I know this is less than 1km from the house. But it was after a lovely lunch – that’s my excuse. Anyway I summoned up what little energy and enthusiasm I had and continued down Lovers’ Lane – no lovers there today, it’s too early in the day and the season. Only languid, lounging families lolling on the grass outside Villa Bali, wondering at the stupidity of a middle aged woman running in the afternoon sun.

Back out to Mill Lane past the water pump station – aarrgghh. I mooched on down the Slope of Hope again, all was quiet through the village not a creature was stirring. I hooked a right into Laundry Lane past our friends’ house, bathed in the late afternoon sun, and passed two dog walkers  – one with his dog on a lead. The other just had a dog lead, I never did see a spare dog. Maybe he hasn’t really got one and just carries a lead as a wishful desire? Or he is the ‘spare lead’ person for the original dog walker?

In truth, I know he has a dog, because I’ve seen him before. But his dog had definitely gone awol.

Laundry Lane has a gradual incline and a couple of what I call uppy/downy bits – you can tell my technical running lingo is coming on leaps and bounds with the aid of this challenge. At just beyond the 5k mark on on one of those uppy bits, Prodigy and ‘Breathe’ came on my playlist – never was an instruction so well timed. I continued on towards our friend’s house, and decided that six kms was enough.

Today was marked by good intentions being kept for lunch, but as I found out when I got back home and checked my running plan, I should have done 9km. Perhaps I could have actually checked my plan before going out – that would have been another good intention. Oh well another incident to be filed under Stupid Tart Syndrome

Good luck to all London Marathon runners tomorrow, my feet are shredded doing this challenge, heaven alone knows how you manage doing 42kms in one go.

Come As You Are – Nirvana

So Why So Sad – The Manics

Have A Nice Day – Stereophonics

TNT For The Brain – Enigma

Maybe tomorrow I can break the 700km barrier?