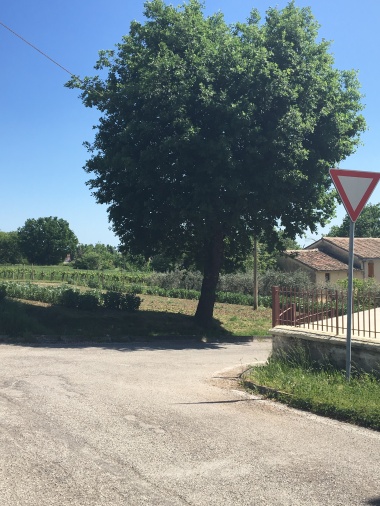 Taking the road less-travelled is supposed to take you on a journey to enlightenment. Well I don’t know about that, but it was high time I took a new road, as my routes are getting bit boring, I keep doing the same ones again and again. A slash of pootler’s pink lipstick and I was out of the door.

Time for a change JCR. On one of my ‘warm down’ walks back up the horrid hills, I had seen a lane that I must have passed hundreds of times, but had never used, so today was to take me to the mystery strada, and see where it went. I’d checked it out on Google Earth to make sure it wasn’t a dead end, as they are not always signed in Italy, but no it appeared to be downhill, going vaguely in the direction I wanted. It had a couple of  forks in the road too, to give me more options.

The words ‘appeared’ and ‘vaguely’ are pertinent. I trotted out on Mill Lane, stopped to flick a v at the water pumping station. The ‘Watergate’ saga continues, the man tried to come out, en route he phoned us, didn’t wait for a reply, despite us phoning him back at least 6 times in  a matter of minutes, he recorded the fact that we were out. So we had to go back down again to the water company and re-arrange another appointment. This is just one of the frustrations all Italians share –  la bureaucrazia! I am not the only person who flicks vs at the utility companies.

Having satisfied my need to swear at the water pumping station, I continued to Lovers’ Lane, to my surprise it was completely empty, no visitors or picnickers although at just after 10am maybe it was a bit early. The barking beagles didn’t get me the first time, as I saw them, but sure enough on my way back, they got their barking revenge and I leapt high in the air. At the end of Lovers’ Lane I took a new turn onto a very steep slope downwards, which is okay but even so my running has to take account of the pitch of the road, and I am still not speedy.

I came across the mystery strada, it continued downwards, not so steep thank goodness  – ouch,  I’ve just spotted the uppy bits. It was more or less taking me back to our house and that’s up the bloody hill. Oh well, it’s still a new road, so I jogged on although the uppy bits were getting distinctly more uppy than I’d hoped. I’m not necessarily avoiding uphill running, but am limiting it, given the enormity of my challenge. Trying to run up steep inclines in heat, as well as do c.50km a week is too tough a task for a relatively new runner. I decided to check out the map to see where I was and I had a fork in the road to look forward to – straight on or right. The right hand fork looked okay so I took that into an even smaller unknown road, oh bum, it’s got more uppy bits. This was not really going to plan JCR, except my plans are a little ‘fluid’/non-existent, in truth.

I rounded a bend and could see that the road was descending towards the Royston Vasey village, in effect I’d taken a ‘long’ shortcut. I meandered my way down to the main road and continued my plod. I was about 5km in at this stage and realised that although I’d done some uppy bits, I was nowhere near as tired as I’d normally expect to be. And then I realised today is breezy and the cooling breeze makes all the difference. I can run happily in about 20 degrees, much higher than that and it starts getting very hard.

Then it was on to my usual loop, past the closed/exhausted fish shop, along to Bin Lane – it had been a quiet run, no runners or cyclists in view at all. then I hit the Via Flaminia, – this is one of the ‘all roads lead to Rome’ roads. And it does, from Fano to Rome. I always run facing oncoming traffic, so I can see which driver is going to run me down. I run ‘defensively’ in that when there are large buses/lorries or chains of traffic I stop and wait for them to pass.

Imagine my utter shock, when, boom, out of nowhere came a car who was overtaking from the other side of the road, he came from behind me and gave me a hell of a shock, he was a few inches from my shoulder and I stumbled. Luckily no-one was driving towards me (which is why probably he chose that moment to overtake). I didn’t do any damage, but when I stumbled of course I lost sight of the traffic. Maybe a moment of enlightenment has hit me, perhaps the Via Flaminia isn’t a road to be running on…, but that really messes up my route planning.

I got to the cafe and had a restorative pastry and coffee and closed my run there. A nifty 9kms. Not bad JCR. On the walk back home up the hill, I spotted a dark, sleek car motoring towards me, it was a hearse and the driver was texting at the wheel. OMG, you’d think being the driver of a hearse may lead you to some spiritual examination of life and its relative shortness. Apparently not, no enlightenment there, just carry on texting whilst driving…aarrgghh

Get Dancin’ – Disco Tex & His Sex-O-Lettes

Love In Itself – Depeche Mode