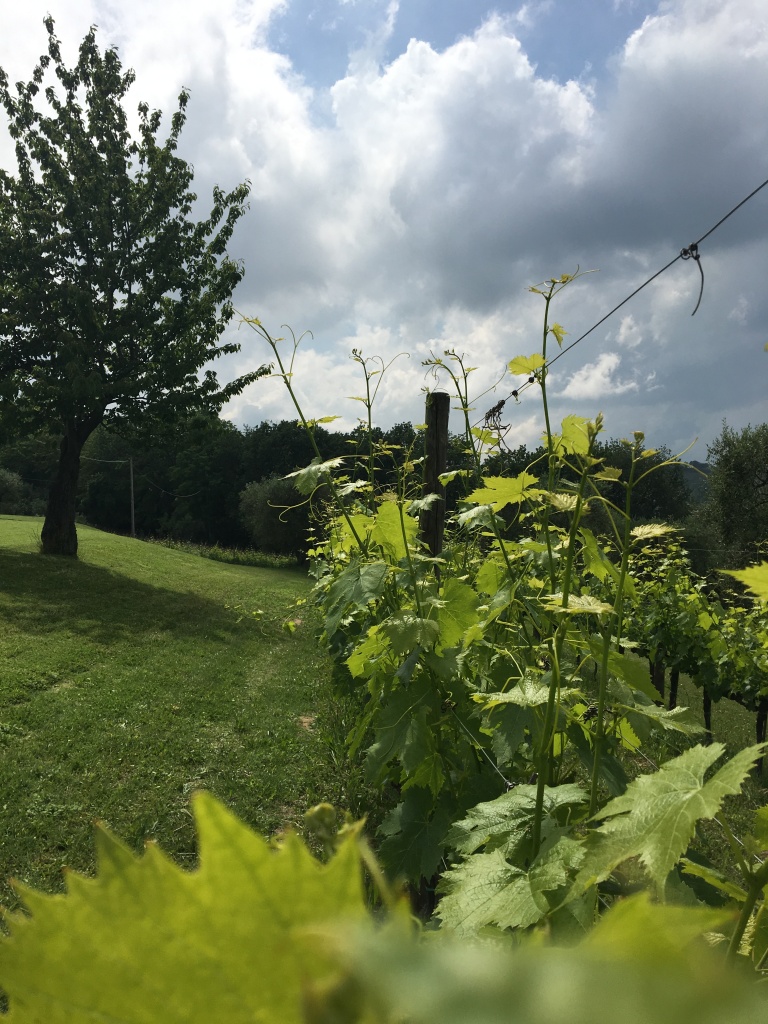 Last night we watched the UK weather forecast and news, seeing people in London and Manchester wearing tee-shirts. We however were sheltering indoors from rain and hailstones the size of marbles. The skies were very grey and overcast, and we did wonder exactly why we had chosen to be here when we could be at home in the sun.

I think this is Lucifer’s revenge – the summer here last year was ferocious, with temperatures regularly topping 40 degrees and some places hitting 50. Evidently Lucifer (as last year’s summer was called here) decided that this year is the UK’s turn and so we in Italy will suffer from rubbish weather.

The hail and rainstorm brought a lot of greenery, gravel and mud onto the roads and so this morning, we awoke hoping that the night had cleared the weather and the roads too. Ahh, no such luck – it was throwing it down once more. Now I don’t actually have wet weather running gear in Italy, mainly because it is almost never required and whilst I don’t mind getting a bit wet, the thought of running in torrential rain didn’t really appeal. Today was looking like another enforced day of rest.

Mr JCR is off to the mountains with his cycling buddies and they are going to both cycle and watch the Giro D’Italia. Having dropped him off at the allocated time and place, I meandered my way slowly back home, avoiding the puddles, branches and general clag on the roads. I decided to take a chance and go for a short run, the thunder clouds were being somewhat menacing over the hills, and it was drizzling slightly, but not too much.

Off I trotted, to Mill Lane passing the water station, which reminds me Watergate Part III has occurred. The Water Company’s engineer turned up to make sure that our leak was genuine and that we hadn’t been filling up swimming pools or selling water to the locals. He asked to look at the water meter and when he saw it said ‘ Oh it’s only a small loss, the meter is hardly moving at all and the reading is very low’. We then had to point out, that he’d missed the critical ‘1’ figure to the left of the dial, at which point he visibly blanched and said ‘I have to talk to my boss, I’ve never seen a loss as big as this, you’ve used almost 10 years of water in 2 months . He then went onto explain that up to a certain limit the water company will do you a deal on lost water, but that we were almost double that level of loss, which way exceeded any authority or guidance he could give.

Then we had to eat humble pie as he explained the benefits of switching your water off at the mains whenever you are away. What was even worse; he felt compelled to show us how to do it…. We often say we need a tee-shirt  for Italy with the slogan ‘I am English, not stupid’  written in Italian, but in this case, we may be English but we were most definitely stupid!

Anyway, I digress, having flicked the V at the water pumping station, I continued into Lovers’ Lane, managed to upset the barking beagles and did my usual tour of Villa Bali, with yet another school trip witnessing my ungainly strides. I turned back, descended the hill that kills, and took the slope of hope, to Laundry Lane, which was nice and quiet save for a lady who was frantically un-bunging a road drain, thereby allowing all the muddy slush to disperse. The rain had stopped, but my hair already resembled an unkempt haystack, I could feel it escaping from my ponytail band. No swooshy, sexy Nike advert ponytail for me…

I turned back on Laundry Lane aiming for home. No-one around, just grey clouds scudding across a greyer sky. Then I saw a lady walker in scarlet with a very bright white ponytail, all nice and swooshy, no fuzz and frizz for her – I wonder what’s her secret. She was taking a gentle stroll admiring the countryside, whereas I was huffing and puffing, wishing the run would end. I’ve come to the conclusion that I am better running in the mornings, I seem to have better energy and humour. In the afternoons I am more sluggish, maybe it’s the post lunch lull. Certainly I wasn’t running particularly fast, given my ‘toe’ situation, I’m deliberately keeping a measured pace.

At just over 7km I finished my run and was walking back up the Slope of No Hope, when I saw my friend C in her car. She stopped and reversed and we had a little chat, she was telling me what great shape I was in and I was telling her how many wrinkles I had… Upshot is I have a coffee invitation tomorrow morning – now do I brave it and run there and back which is a cool 12km or thereabouts? The run has hills, lots of them and some of them are up to 18/19% in gradient, so it’s hardly an easy one, especially with a toe that will probably need amputating at some point (okay somewhat overstated the injury!).

Or do I drive over and back and do my run afterwards, at which time the weather forecast is telling me we will be hot and sunny…, which means I will have to wait until late afternoon to run. Which takes me right back to my earlier point, I’m not very good at running in the afternoon.

The decision will have to be made over a glass of vino collapso, although I’m on my own, and in truth don’t like drinking alone. Maybe a mug of tea is a better decision making tool. As you can see from the pic, our wine making grapes are a long way off being ready, so if I wait for them to mature, I won’t be making a running decision until October at the earliest, and that’s a little bit too late for tomorrow’s run.

Tears Dry On Their Own – Amy Winehouse

He Can Only Hold Her – Amy Winehouse

The Things That Dreams Are Made Of – Human League

I Would Die 4 U – His Purple Highness

The Bitterest Pill (I Ever Had To Swallow) – The Jam

You Love Us – The Manics