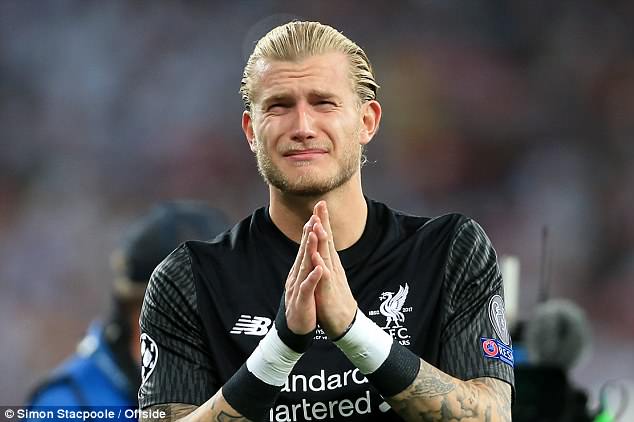 After squeaky bum time, came  broken dreams time, when Liverpool had a nightmare of a game on Saturday night. It wasn’t that we were beaten by an incredibly strong Real Madrid, we were beaten by some misfortune and a couple of mistakes of our own making.

Our goalkeeper  Karius gifted their first goal by mishandling the ball and then to compound his misery, he was a contributory factor to their third. They beat us 3-1 and injured our star player Mo Salah too.

I hadn’t expected us to win, even with good luck on our side, Real Madrid have form in this competition, they’ve won it more than any other team. Although Liverpool FC are the UK’s best team in terms of European competitions, we fall a long way behind Real Madrid.

And so why should today be ‘Give Karius A Hug’ Day. Just because the poor guy has been receiving death threats on social media for his part in the defeat. Now I was as shocked as anyone and yes I howled when he made his howler, but it’s a football game, no-one died. Even though our famous manager Bill Shankly always said football was a matter more serious than life or death!

I can remember just under a year ago, having one of my worst runs ever, it totally floored me and I really lost motivation and was quite upset. And what made it better was the unending support I got from my C25K forum buddies. They came to my aid at my moment of great distress – in fact I look back on that run now with some embarrassment – I can’t believe I made such a fuss. But at the time it felt devastating to me and for Karius, Saturday night must have been too. He has apologised to the team and fans for his errors and says he will come back stronger, but I noticed on the night that the other Liverpool players were too shattered and upset to go to his aid. He was all alone with his despair, amongst his team and thousands of fans. How horribly lonely that must have seemed.

And so today when I was doing my run, which went brilliantly well – I planned to do 10km but managed over 12 (yay) – I was thinking about Karius. To quote from The Green Mile, I said he was a ‘Dead Man Walking’, because if his team-mates couldn’t be there at that precise moment, when he needed them, then clearly there’s something not quite right.

But thinking on it again now, he was alone, horribly alone, with all his self doubts and worries and I’m not so sure being surrounded by 11/12 team mates would have helped anyway. Today, I had a good run, my legs felt fine, my toe was not hurting, I wasn’t too hot, nor too cold, it was just a fab run. I hadn’t planned it that way, it just happened.

And that’s what Saturday was like for Karius – he didn’t plan on doing what happened, it just happened. That’s why today should be ‘Give Karius A Hug’ Day, because when the shit hits the fan, your mates rally around, just like my C25K buddies did just under a year ago.

Wake Me Up When September Ends – Green Day

Year Of The Cat – Al Stewart

Holding Back The Years – Simply Red

Dancing In The Dark – The Boss

Have A Nice Day – Stereophonics

Fall At Your Feet – Crowded House

I’m Gonna Be 500 Miles – The Proclaimers

One Step Beyond – Madness