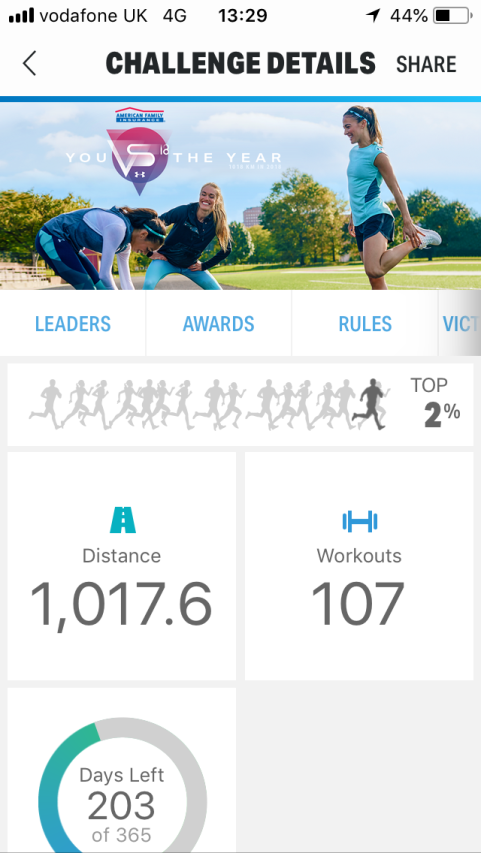 what’s 9 degrees between friends? It’s the difference for me between uncomfortable running and almost impossible running. Our home in Italy is reaching over 90 which is more or less 29 degrees in Celsius. London, however a warm 73 F but 20 in Celsius . It doesn’t matter which scale you use, London is most definitely the easier place to run. And so I must – not least because today I get to beat my half year km target, ahead of the end of the month. All these extra London kilometres will give me some breathing space in the heat of an Italian summer.

My starting tune was Here I Go Again (On My Own) by Whitesnake, which seemed somewhat apt. I was dressed in a sleeveless top and shorts, mmm it’s a bit parky as we say up North. It was really quite cool and City gents all suited and booted, did look at me somewhat askance as I ran past. I knew I had just over 2km to do to reach the halfway point and as is typical of my luck, I didn’t exactly make the milestone at an historic venue.

I have run past the Guildhall, St Paul’s Cathedral, St Bride’s Church even the Old Bailey and any of these would do as the significant milestone marker. However my running history was not to be made in any of these places – I ended up outside a salad bar called Tossed… Somewhat tossed off at the lack of a monumental historic selfie opportunity, I continued on my way knowing I am on the official downward slope on my challenge.

Heading towards the West End again today, retracing in part Saturday’s run, up to Tottenham Court Road and back to the British Museum. It wasn’t getting much warmer, but I was nice and toasty now, despite getting a puzzled look from a lady in a woollen coat crossing the road beside me. I am thinking she may be a distant relative of Dame Duvet – our puffa jacket loving walker in Italy.

My pace was nice and even, but I neither had the legs nor time available to do a long run today and so at just over 10km I called it quits. Rather irritatingly, I called a halt just that little bit too soon, had I continued for 0.5km more I would have had less than 1,000kms to go. So for the second time today, I was tossed off.

However in big shouty capitals  – I HAVE RUN MORE THAN 1009KM in less than six months. If ever I had doubted my ability to do this challenge, now I know it’s a done deal. I may well have some ups and downs, and I may have some more ‘tossed off’ moments. But this challenge is in my sights. To celebrate my achievement I had lunch with Razouski from C25K and two glasses of bubbles at the Barbican. Tomorrow, I will be hitting two celebratory places – the gin distillery to create my own gin and then dinner at Nathan Outlaw’s. But no gain without pain, I have to run again to earn the celebrations.

The Can Can – Bad Manners

Money For Nothing – Dire Straits

Eye of The Tiger – Survivor

You Ain’t Seen Nothing Yet – BTO

Bat Out Of Hell – Meatloaf

One Step Beyond – Madness

All Over The World – Electric Light Orchestra

The Wonder Of You – Elvis Presley

Sex On Fire – Kings Of Leon

98 kilometres ahead of my cumulative target