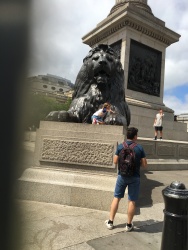 Not even near the lions this time 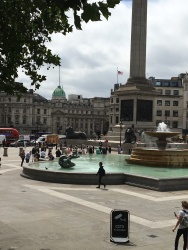 They are not in St James’s Park 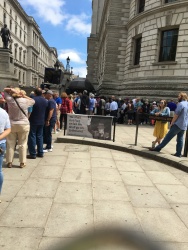 Nor at Palace of Westminster

Here are our ‘missing’ Italians

On Monday I was given an important job, I was left in charge of making sure our Italian friends enjoyed the last part of their stay in London. My tour of duty left me in a state of dizziness, induced by counting fatigue.

Monday morning was fine –  me and Mr JCR meeting up with them on Moorgate – except my instructions were ‘meet Moorgate Tube North Side’ – was met by a confused ‘the signs say East or West’ – turns out there are different signs depending on which exit you take. Needless to say I’d taken the instructions from the side our friends hadn’t taken. Ho hum,  this is why I was somewhat concerned at becoming the responsible adult on Monday afternoon.

Monday morning had started down East – and then we were heading up West. It was my job to take them from the Thames Clipper, get to Pimlico tube, then Knightsbridge, for a whizz around Harrods before returning to LHR T5. Simple…

In the morning we were 10 people, after lunchtime Mr JCR had dropped out to ferry their bikes back to LHR. Now we were nine. At Pimlico we were down to seven when one couple had a meeting in the West End with a son’s friend. Seven of us in the food hall, which shocked and surprised in equal measure. The shock of £270 for a decorated cake (quite small) was matched by genuine surprise that a jar of Nutella was (a) being sold in Harrods and (b) for a price more or less the same as in a Le Marche supermarket. Out of Harrods into a souvenir shop, well two of us in there, now my counting was down to five. Back up to seven once the shopping was done, then back to the tube to wait for our final two. Except our final two had made a mistake on the tube exit. So leaving seven behind, I went on a mission to find the missing two lambs – they weren’t far away, but my heart was pounding. Mr JCR had managed to get them around London on at least two cycling rides and a Saturday walk, taken them on a 100km + ride, and I’d almost lost two of them right at the death of the trip. Our numbers back up to nine, we went happily on our way to LHR.

I had developed counting fatigue and was talking Italian to English people and English to Italians, so after our friends departed on Tuesday, a day of rest was in order. Wednesday was run day, and I more or less replayed the walking tour we’d done with our Italian friends on the previous Saturday. Only this time no festival of Musicals at Trafalgar Square, no lions covered in protective barriers and no Italians to count. Except I replaced one set of counting for another. I had a slight deficit to make up, I should have run on Tuesday and didn’t, so I wanted to do 12km as a minimum. But a very lovely, fun-packed weekend, had made its mark and I was now counting the cost of three evenings out, and so I just about managed 12km. My pace was okay nothing exceptional, but I did keep going. When I got home, I realised I was going to Ascot on Thursday  and no chance to run, so that meant another run was on the cards for today.

The countdown to run number two had just begun and then I remembered I was a responsible adult, I hadn’t lost any Italians in London, so for sure I could manage another one

I Love You Because – Jim Reeves

My Girl – The Temptations

Don’t Let Me Be Misunderstood – The Animals

What Do You Want – Adam Faith

All I Have To Do Is Dream – The Everly Brothers

Will You Love Me Tomorrow – The Shirelles

Walkin’ Back To Happiness – Helen Shapiro

The Great Pretender – The Platters

No Regrets – The Walker Brothers

Make It Easy On Yourself – ditto

Why Do Fools Fall In Love – Frankie Lymon

Tell Him – The Exciters

Then He Kissed Me – The Crystals

One Fine Day – The Chiffons

Leader Of The Pack – Shangri-Las