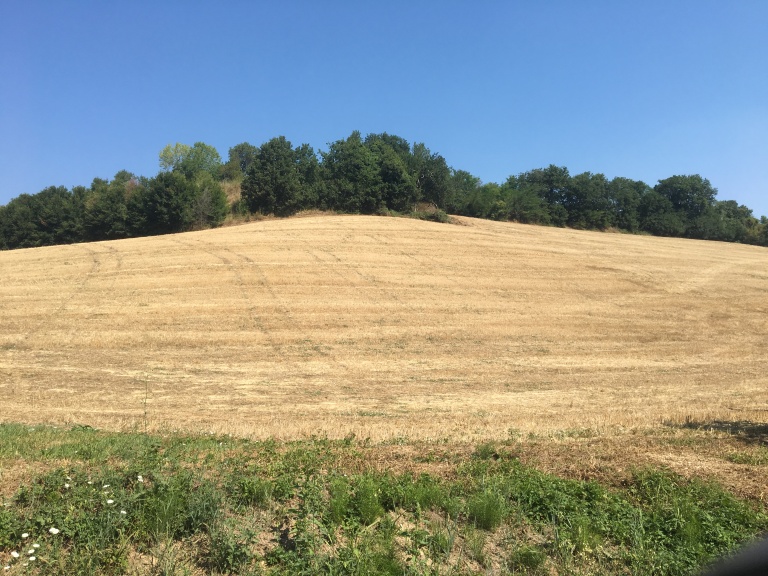 Yesterday was supposed to be a run day, but we were up and out early to go to AVIS -not the car hire folk, but the Italian Blood Donation Organisation. We’d asked our friends if we could donate blood, not actually being Italian residents and they said they’d ask the President of AViS locally and see what he said. So we found ourselves in Fano hospital yesterday morning and we were shown a form that needed completing with just one question pertinent to the UK. Have you lived for more than 6 months in the UK during the period 1980something and 1995. Of course we answered yes and that was enough to stop any thoughts of blood donation.

Apparently no EU countries will accept UK blood due to mad cow disease,  and in Italy there is a 40 year post mad cow/CJD ‘quarantine’ period, at which time they’ll happily accept our blood. I have a feeling that by that age we’ll be needing our blood more than Italy will. Back home we trotted and with temperatures already 28 degrees at 10am, all thoughts of running were put firmly back in the drawer marked do not open.

To this morning, Mr JCR was up early and suggested I should do the same to take advantage of cooler temperatures, of course I fell back asleep and woke just before 9am. Hardly an early start… I made my way to Mill Lane and up to Lovers’ Lane and was going to complete my mini loop of Villa Bali’s grounds, but I couldn’t because garden furniture was being arranged for an event. Now Lovers’ Lane has recently been the site of various alien direction signs, and Villa Bali does have both a telescope and planetarium. The clues are mounting – clearly there’s going to be some astro-physical event happening soon. I think we better be somewhere else just in case the close encounters get too close.

I switched back and took the Royston Vasey ridgeway towards War Of The Worlds lane, a gruppetto of junior cyclists passed me,  one seemingly supporting another and he  groaned ‘porca miseria’ as I went past. Given this means ‘misery you bitch’ in the literal translation, I was hoping he wasn’t aiming it at me, and more at  the incline which needed ascending. Up to WOTW lane and a fellow runner passed in the opposite direction, he waved in acknowledgment and I continued on.

WOTW lane is in the midst of harvesting and as I made my way to the coffee stop, I passed one ploughed field and then in the field next door was an old guy, scything grass. He waved and shouted something which I thought was ‘Omertà’ which is the Mafia silence code – that didn’t seem quite applicable, unless of course he is a rural hit man, taking victims out by scything them to death and burying them in the field. But he looked quite benign, although maybe that is how he sucks you in.

Alternatively, he might have said ‘ha merita’ which means ‘you deserve’, but I’ve no idea what exactly I might deserve. Or finally, if he just said ‘Merita’ according to the Urban Dictionary that means I’ve got big boobs…  If he was speaking in dialect, then I stand no chance of getting the meaning as dialects vary tremendously throughout Italy, for example ‘they eat’ is spoken as ‘man jan oh’ – but in one of our local dialects it is ‘man yan yan’. I am of the opinion he was being complimentary – even if it was aimed at my boobs!

On I continued, had my coffee and brioche and returned back to the sultry heat of WOTW lane and my run. Truthfully I do have mad cow disease, as the temperature is scalding, now the shade has all but disappeared and I’m out in the mid-day sun. I can’t maintain much momentum, my pace drops to a pathetic 8 minutes + for a kilometre and I give it up after another 2.6km.

Memo to self, when suffering from mad cow disease, do not make it worse by running at midday. Truthfully that makes me a stupid cow, deserving of big boobs and or death by scythe…

Shake It Off – Taylor Swift

Layla – Derek and the Dominoes

Dear Prudence – Siouxsie and The Banshees