WARNING THIS BLOG CONTAINS A PICTURE YOU MAY FIND DISTASTEFUL….

Is that yellow glow the moon? 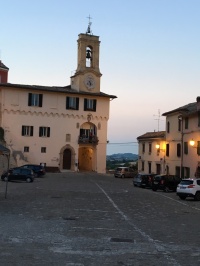 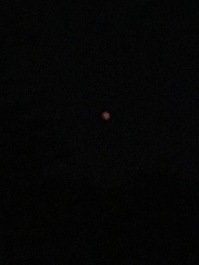 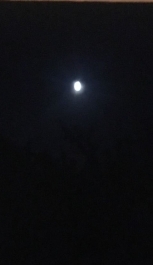 Last night’s ‘spettacolo’ came and went, with over 2,000 people attending the Villa Bali special program for the eclipse and red moon. We didn’t go but were told by locals that it would be a ‘casino’ which is a disaster, as there were far too many people and not enough room. And as we were also told, we didn’t need actually to go to Villa Bali for the spectacle as our house is more or less the same height on the hill, and we could actually hear the audio commentary if we wanted. It was suggested that we could open our house to the public and make some money.

All this was discussed as we had an impromptu aperitivo in the local village, where, we were delighted to see the bar had its old owner in situ.  The ex-owner ‘C’was there just on a one week ‘bar-sitting duty’ but it was wonderful to see her again.

Our first colour of the evening was Aperol orange, C was wondering where the moon was and if she would be able to see the glow – as she described it ‘I am drunk but only on water’ as she then proceeded to talk about the wonderful yellow moon glow in the piazza, which we sadly had to correct here wasn’t from the famous moon, but rather a hidden street lamp.

Second colour, therefore streetlamp yellow. We enjoyed our spritzes and wended our way home, we could hear the Villa Bali event in full swing and the tiny pic of a red blob, is my proof of the Luna Rossa. Third colour seen. About an hour later the eclipse occurred – no point in taking a pic as the sky was just an all over inky black. The fourth colour done. Now the eclipse started to move away and the whiteish moon re-appeared. Fifth colour done.

So to this morning, the sky a vibrant cerulean blue – sixth colour done and Mr JCR informed me it was molto scorchio and that it would be good idea to get out. As I am none too keen on following Mr JCR’s advice, specifically when it comes to getting up early, I mooched around and faffed for a while, but then made haste and got out. This was before 8am, pretty much a record for me. I was wearing my orange and blue shorts, shocking pink belt and grey trainers. Another four colours logged. Up Mill Lane, nothing to see, all in shade and onto Lovers’ Lane – the scene of last night’s chaotic spettacolo. I saw Lord Kitchener, who was there tidying up as ever, in a navy blue top. And that’s me up to eleven colours. Ahead are two walkers, wearing camouflage colours, a light sand colour – they almost match the hayfields. 12 colours done and dusted. I enter Villa Bali’s grounds and see the cordoned off area for what I assume was the alien space craft landing space, but no sign of scorch marks or anything untoward. Maybe they didn’t fancy visiting with 2,000+ Marchiganian earthlings nearby.

I take the Royson Vasey ridgeway and being earlier than usual, it is eerily quiet. No pedestrians, cyclists, nor Miss Marsupio. I pootle along to the fish shop village and finally see signs of life, which is good because I was beginning to wonder if maybe the Martians had actually turned up and spirited folk away…

I run up Bin Lane, nicely in shade, if a bit smelly, and make my  way to the coffee shop. Aha it’s a riot of colour here, with many folk dropping by for breakfast before going to the beach. Way too many colours to count, but no boring beige at all. My face is a very hot salsa red, and I cool down with a welcome water, coffee and brioche. I’m not sure how that stacks up on running nutrition, but it works for me. I end up running back home along War Of The Worlds lane and saw a topless runner coming towards me. All I shall say is that he was generously proportioned and I don’t really want to describe his body colour! After about 3kms, I was finished and walking in the shade and spotted the snake, recently deceased I reckon, because he didn’t move and that was my final colour  – Slytherin Steel.

A tidy, colour-filled run of just over 10km, finished at just after 9am and the mercury had already risen to 26 degrees.

Be My Number Two – Joe Jackson

Dreaming of Me – Depeche Mode

Is Vic There – Department S

No More I Love Yous – The Lover Speaks

Purple Rain – His Purple Highness and The Revolution

Somewhere In My Heart – Aztec Camera

I Am The Law – Human League