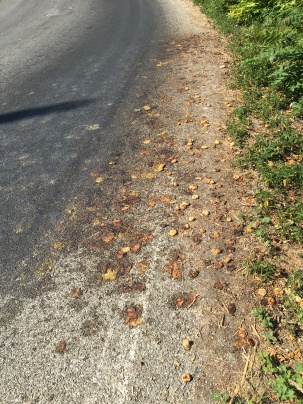 It’s a late start and yes I know I should have got my lazy arse out earlier in the day but I didn’t. After customary faffing, I had in my plan to do about 12km today, mainly to get the terrible 13s out of the way. This month has been punctuated by migraines to an extent that I’ve lost a lot of my banked progress and so it would be quite nice to say Ciao to the terrible 1300km range and start on the 14s, with fresh impetus.

I made my way to Mill Lane and straight off the bat, Map My Run confirmed I hadn’t moved an inch despite taking 5 minutes of walking to get there. Okay, restart the app, it’s not a big deal, as the first 5 minutes walking warm-up never count anyway. On I ambled to Lovers’ Lane, aha it is a bit scorchio today and I think I may have made a strategic error being so late. Okay JCR, make up your mind – choice (a) wimp out and walk back home (b) continue and see what you can do (c) stick it out and do the 12km. Choice (a) not really a choice at all, considering I only committed to a new running plan yesterday. That left b and c. Either would be fine. In Lovers’ Lane I was all alone and I realised I was very thirsty, mmm today’s run not going to plan at all. I also spotted some dropped figs, which are slightly squishy underfoot, not an ideal running surface – better keep your eyes peeled JCR. The run continued without incident, I was running along the bendy, scary road, and spotted more figs ahead. No worries I ran around them, no problem at all and in the distance I could see a cyclist coming towards me – all in white, head down and coming up the hill.

As Mr JCR is a cyclist and has many cyclist friends, I always look out for them in case I recognise any. On my way down the hill – totally free of traffic, this arsehole on a bike, kept his head down, didn’t give way and I was forced onto the verge, as he passed he caught my eye and didn’t say thanks. An arsehole truly – given he was wearing  ridiculous white bib shorts – you could see his arsehole from behind too. I cursed him, using ‘figging hell’ or similar.

Normal service was resumed when a little later, an older group of cyclists went past me and shouted Brava Signora – an altogether nicer experience. I am going to be totally ageist here – the arsehole on a bike, was I estimate in his mid-twenties – clearly manners played no part in his education. And so it was with a great sense of schadenfreude, when later on in my run, I saw him again with a problem trying to fix his chain. I sincerely wish him more chain breaks, and a few near misses too.

That’s the arsehole rant over… 🙂

There were a couple more fig puddles to work around, on the way into fish shop village, but I must admit that at just over 8km in, my plan for today was undergoing a rapid recalculation. My average pace was atrocious, the heat playing its part, my legs felt like lead and I wasn’t really enjoying the run. Okay JCR you’re at a crossroads literally and metaphorically, do you continue the run or call it quits and walk. Well my bloodyminded gene kicked in and I decided to continue running, but accepted the pace would be slow.

In Bin Lane, it was not so shady, and the heat was catching up with me, I glanced at the app and I was just over 9km – okay let’s make it 10km and I’ll call it a day. Onto the all roads lead to Rome road and I clicked over the 10km mark. Job done, I’m a bit miffed that I didn’t get to 12km and get into the 1400s, but it will happen next time out.

Rehab, Back To Black – Amy Winehouse

Is She Really Going Out With Him – Joe Jackson

Rock the Casbah – The Clash

Jenny Was A Friend of Mine – The Killers