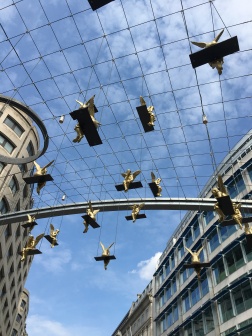 Looking to the angels

A sleepy Bank Holiday Monday run beckoned and I got changed rather hopefully into shorts, then when Mr JCR gave me an official weather warning from the Balcony Meteorological Office, I duly changed into leggings, a long sleeved top and running jacket.

Week 4 on C25K turns up the heat a little, in that each run/walk interval increases so that you do more running than walking. Classic interval training. As ever the City beckoned, mainly because it is reliably quiet and there aren’t so many awkward squad folk around, you know the type. The ones who won’t keep their distance, and in fact seem to make a beeline for you.  So I decided to mooch around some of the City side streets listening to my Dad Dancing playlist, which is full of great tunes to make you smile. I was listening to Dreadlock Holiday by 10cc  – I didn’t find a ‘A brother from the gutter’ nor did ‘They looked me up and down a bit’ or ‘turn to each other’.  But  I was in touching distance of Gutter Lane, which must be where those brothers actually hang out.

The street names in this area really reflect the truth from the City’s medieval past, and Gutter Lane, I was convinced would be a rather nasty sewage related place, but in fact it turns out it’s a corruption of Godrun/Guthrun  and became Gutter Lane in the 1500s. Unsurprisingly, there’s only one Gutter Lane in all of Britain and I got to run down it.

Enough of gutters, it’s bad enough being in lockdown, without keeping my mind there, so I channelled my inner Oscar Wilde (no similarities at all really – male vs female, Irish vs English, went to jail vs. only visited jail in Monopoly, drank a lot, aha I’ve found the missing link).

He famously said ‘We are all in the gutter, but some of us are looking at the stars’.

I thought star searching would be in order, I did my first couple of runs in and around Cheapside and headed towards St Pauls, where I knew I’d find some angels. Looking up it made me smile, although I was a little puffed, having done my first longer 5 minute interval run. Okay they’re not stars but they are heavenly creatures, and I am not running in the dark. Looking down towards the pavement I saw the tulips, I really love this sign of Spring, it’s very cheery and kept me going.

Mr Smooth was his usual encouraging self, and reminded me if I was suffering from a stitch  (I wasn’t) a drink of water would be in order. Except I’d forgotten the water again, curses my running routine still isn’t off-pat. I need to have a running station ready in London, except there’s precious little room here, and there’s no space for one.

I ran into Ely Place which strictly speaking can be considered to be in Cambridgeshire and at this time Greased Lightning was on, and so I sped down the place, twirling around the lampposts, which was a bit childish but great fun. My final walking interval took me up to Chancery Lane tube and I did my final 5 minute sprint there – in truth not so much a sprint, as a trudge. But job done – the first week when running overtakes the walking.

Walking towards home I spotted my final gutter reference and it was the cherry blossom in the street gutters, who knew litter could be so pretty?

Upped the ante today for this week of runs

Touching Toes – let’s be honest ain’t never going to happen , a plank of wood has more bend than me. But I got to touch the hem of my leggings and that has to be progress 🙂