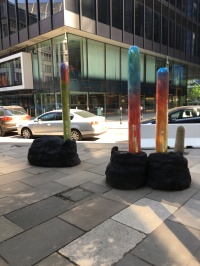 And yes – we have dicks in the City 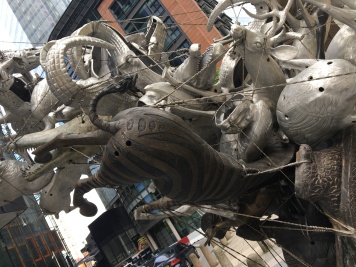 Who knows what this is 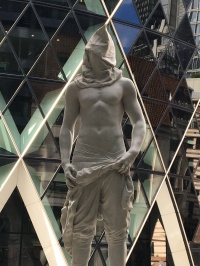 His parts are covered

Today is Mr JCR’s significant birthday, like mine in March, it’s been somewhat scuppered by COVID 19, but at least we are both still here to have birthdays. Tonight we are ordering a posh meal in. Yippee no cooking for me!

We went for the exercise hour walk last night in and around the City as it’s much quieter and far fewer chances of bumping into people, scooters, cars, vans etc.

On our walk we started following the informal statue trail of Art in the City and came across the first one. What to say other than ‘the City is full of dicks, so we might as well have a statue of them’ and the explanatory plaque said it is an homage to the petrified tree stumps found in lava flows, that stand like statues or phalluses – often worshipped by man.

Okay, enough pseudo art critic crap, I decided to re-trace my steps on today’s run, as this statue counted as a previously unseen sight and I had three sights to bag for my Week 7 run challenge. Just around the corner was the metal jumble of animals all stuck together by wire, that had a similarly impenetrable explanation of its meaning. I decided it was much easier just to focus on the tall buildings, similarly phallic, though they seem to be de-rigueur in the City now, and so I ambled my way to the Gherkin, the daddy of them all.

And sure enough, another statue  – this time of a partially clad male – no idea what he symbolised either as there was a fully clothed hi-vis man sitting on the explanatory plinth. Social distancing prevailed – I may never know what a partially clothed man with a bag on his head means.

These statues got me through the terrible tens – the first ten minutes when running anaerobically, and enabled me to settle into a rhythm. I headed towards St Pauls and Chancery Lane and spotted the first tentative signs of life in the City. A few of the coffee bars and cafes are re-opening on a takeaway basis, and I actually saw some queues of real people, outside something other than a pharmacy or supermarket.

I have to say it’s lovely to see some life stirring, it’s felt somewhat post-apocalyptic recently. In St Paul’s I got my five minute warning from Mr Smooth, telling me I should continue to breathe, and of course I followed those instructions to the letter. I may have been breathing heavily, but I was breathing and then I zoned out.

For whatever reason, I carried on running and managed the full thirty minutes, which is what C25K is actually designed to get you doing. This was by mistake – I was listening to my boy band mix, which has some rather tragic tracks on it, and I was mentally singing along to Shang A Lang by the Bay City Rollers. Because it’s such a fun track, I really didn’t hear Mr Smooth tell me to slow down to a walk, and so in Week 7, I actually ran one of the runs for Week 9. Seventh heaven indeed.

The City may be full of dicks, and I was a bit of one for not listening out to Mr Smooth. Now if you pardon the pun, I have to make sure I don’t get too cocksure for Week 8, when I have to run a 28 minutes interval for the three runs.

8kms run/walk – although I estimate about 4.3 kms on the running element

Best track – Shang A Lang by The Bay City Rollers, because it got me running for thirty minutes solid

Same old routine, but I have managed to touch my toes. I realise that hardly makes me spaghetti legs, but it’s a bend in the right direction.