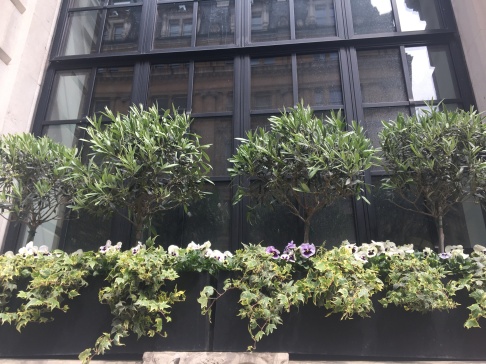 Yesterday was an unplanned rest day, due to raging cystitis calling the shots. Today it’s not quite as bad, but my plan for my run went out of the window, with proximity to home, being the key consideration. (I didn’t want to do a Paula Radcliffe by the side of the road, if Mother Nature called urgently)

Nearby, there is a quiet place called Finsbury Circus which is just off Moorgate and happily circular, so you can do laps. It’s also within sprintable distance, should my bladder start screaming. For the purpose of this post, I’m renaming my bladder Paula.

I always like to give myself a challenge to find something new to look at or do or find, as it helps me to stop being obsessed by the  C25K countdown. Mr Smooth piping up ‘well done, you’ve just completed five minutes running’ is meant to be encouraging, but in the early part of the run and the programme it can be quite depressing, especially if you’re feeling puffed already. But the problem with choosing a small circular route is there’s not much to see, I joined the circus at the 6 o’clock junction and followed a clockwise route. To my left up to about 10 o’clock I saw plenty of plants and window boxes, all very nicely manicured with olive trees featuring a lot. It certainly seems that the 6 to 12 semi circle companies enjoy more money than the 12 to 6 semi circle, as their plants were sparse, the railings scrappy and it all looked a bit neglected.

I managed four loops and then boredom hit me, as did a few pedestrians (metaphorically, not literally – they did socially distance) who decided it was a nice quiet place to walk too. Okay, plan b enacted, I’ll stay in the shade and seek out some quieter roads but still close to home. I meandered in and around the Bank of England, near Cornhill and Lothbury, all beautifully tranquil and then Paula broke her silence.

At about fifteen minutes in to the interval, she was whispering (JCR – you need to go now), but I put her firmly to the back of my mind as I was listening to Ray Stevens – The Streak on one of my playlists. It helped for the two minutes or so it was on.

Then Rick Astley burbled Never Gonna Give You Up, which helped silence Paula for a few more minutes. Unfortunately, Down Under by Men At Work with its increased tempo, made Paula stop whispering and she became a much louder chant in my head.

This was not good at all, so I decided I would continue the run until I’d done the full interval and if I had to bail out of the warm-down walk so be it. Evidently, mind over matter does work, because having made the decision to not try and fight Paula, all of a sudden she logged out of my inner ear.

I continued the interval and then Mr Smooth brought me back to reality with his time check – the twenty eight minutes were done and dusted, but as I was no longer carrying Paula’s voice, I thought I’d try and run just a bit longer and I managed the thirty minutes interval. Great news, I was just a shade under having run/walked 5k in the allowed time. Still about 20% slower than at my best, but then that’s what a year off does.

The warm down walk was fine, I managed about 3kms before turning towards home, at which point, Paula started screaming and it was very loud. I was certain most of the folk around could hear her screaming at me to GO NOW!!!!  If they couldn’t hear her, they most certainly would have spotted a woman doing a cross between John Cleese’s silly walk and Max Wall’s unusual gait, with a muted yelp from between clenched teeth.

Kegel exercises, a fixed grimace and baby steps all combined to prevent Paula from having her moment.

Most appropriate track = Under Pressure by David Bowie and Queen (but it didn’t come on), so that made me Happy by Pharrell Williams, which did