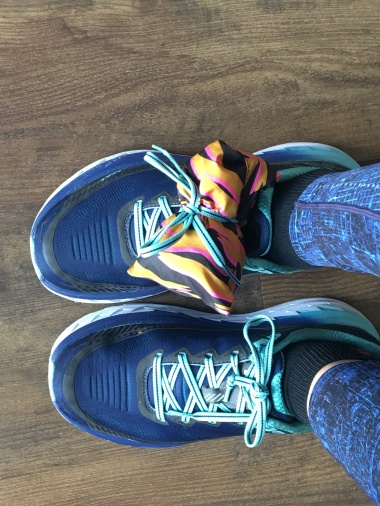 Another Day, another shopping bag 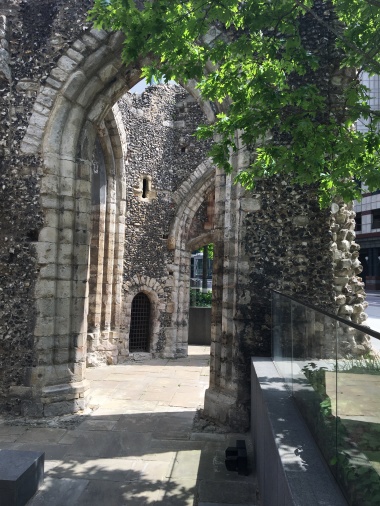 Could this be my finishing arch?

Paula  evidently likes hanging around, I was supposed to do this run yesterday, but she likes lockdown and had hunkered down for the long haul.

I did what you can only do in these circumstances and had a telephone based GP appointment, self isolating not necessarily by choice, but because Paula was calling the shots and I couldn’t really venture out to run.

One week’s prescription for antibiotics later, I was able to run today. As you can see my new natty shopping/trainer bag combo made an appearance, for a run out in Week 9.

It was warm and I was a little bothered that I may not be able to take the distance, so I deliberately slowed down and ran like a snail. In fact I’m overstating the speed, an asthmatic snail could have gone faster, I took a little diversion to Barbie Green and the sunken gardens that have a little slope in them and spotted the arch. It’s not exactly in the most convenient place, But I think that is where I will finish my second ‘graduation’ of C25K. It’s old like me and based in the City like me. It’s also only a 3 or 4 minute dash from home if necessary.

I was running circuits along London Wall, Fore Street and Wood Street, which is a triangular run, except for the zigzagging done in The Salters Garden, where a lady had chosen to sit for a peaceful reading session in the sun. Her silence was shattered every six or seven minutes when yours truly came puffing past. She did at least smile when I went past, unlike the security guy in Wood Street who was very seriously guarding an empty doorway in his parka coat, with the hood up and glowering very time I went past him.

Now I know it’s not exactly tropical but it was about 18/19 degrees or 64 degrees in old money and he was totally wrapped up for Winter. I have a theory he could be a long lost relation to Dame Duvet who walks our hills in Italy in quilted clothing even when it’s in the 80s. Peter Parka as he is now known –  I think may suffer from agoraphobia, because I’ve seen him many times on my route and I’ve never seen him more than a yard away from the empty doorway. Maybe he sees me as a potential security threat and thinks that I could be casing the joint – it’s just a back door as far as I can see. However, when my speed is up and I look a little less like an asthmatic snail, I will look at the door more closely, in case there’s any sign of gold bullion or diamonds or chocolate.

My musings on casing the joint were rudely interrupted by Mr Smooth telling me I had only one minute to go, leaving Peter Parka behind me I continued my run. Then finally Mr Smooth told me my run time was at an end, so I snuck in an extra minute or so, just to make up for my last run in case I’d got the timing wrong. My warm down walk took me past Peter Parka – I did smile but he just did that London thing of ignoring me.

Can I just say Peter, your distant relative Dame Duvet is much friendlier. And that is my first graduation run done and dusted. Two more to come and I’m back as a proper runner once more. Yay.

Oh and yesterday I got a new skipping rope, although you’re not supposed to call it that it’s a jump rope, and it’s not a rope, it’s a wire and you can’t skip slowly with it either. Oh and I can’t even skip with it, as my coordination is rubbish. Mr JCR did loads without blinking – me , well that’s another challenge I am to jump roping what I am to being bendy…

The Usual – but I’ve increased it a bit:-

Hip Flexors – 5 reps each leg with 1.5kg weight on the resting leg

Toe touching – 10 (it doesn’t seem a lot but for a plank of wood, this is seriously impressive)

Best track – Motorbiking by Chris Spedding, on my last upward slope run in the Salter Gardens – I wasn’t motorbiking at the time, but it made me lift my head and increase my speed a bit