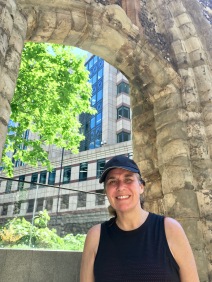 Bit puffed under the ‘Victory Arch’

Bubbles on the Balcony

So today has arrived once more – the final run of C25K – the graduation run. Today is my last official date with Mr Smooth and also a very sad day for me too. This is the first time I’ve actually run on my dad’s birthday, and this is the first after he died in December, so on my twenty-seventh run for my C25K graduation, my thoughts were a little mixed up.

You can’t measure how much someone means to you, but I thought the best tribute I could pay was to make sure I ran on his birthday, as I’m sure he’d be proud that I’d kickstarted my running once more. Prior to the curse that is Alzheimer’s and vascular dementia – he had both in a rather nasty combination, my dad was the fittest he’d ever been. He swam daily from Spring to Autumn, played tennis at least a couple of times a week and did a set number of lengths on his rowing machine (mainly because he didn’t know how to re-set it!) He had calves like flat irons and was as fit as f..k.

After a coronavirus Spring, I haven’t run daily, can’t play tennis, hate rowing, and my calves are more a Cornish pasty shape than a flat iron. However my retirement bod is a work in progress, and hopefully once lockdown recedes and we can get back to Italy, my fitness and shape will improve as I am the proud possessor of a corona paunch and a drawer full of ‘wishful thinking’ clothes.

Mr JCR promised bubbles on the balcony if I completed the run, what more encouragement does a girl need?

The sun was glorious and Mr Blue Sky was playing to start me on my way, I was going to do the usual triangle for thirty minutes. Shoulders and head heavy in thought I set out, actually avoiding the sun as it is a tad scorchio and I’m not acclimatised to the heat at all, following seven months in the UK and no warm Italian sun to get my muscles going.

First loop around, not so bad, no Peter Parka to glower at me, but quite a few chauffeurs hanging around the pavement so I needed to dodge more parkers and run in the road. On the second loop I decided it wasn’t really conducive to a relaxing run and set off towards the City and St Pauls, hugging the shade. My first kilometre was a lot faster than I’ve managed since restarting the program, and that was very encouraging. Keeping the rhythm I just kept at it and magically the one minute warning came through. Mr Smooth jubilant in his praise for me nearly doing the full thirty minutes, but what I hadn’t told him was that I was going to keep going until I’d actually hit 5kms, rather than the 30 minutes non-stop running. So I kept on going and at about 36 minutes I hit the magic 5km number. Not fast, not pretty, very sweaty, a little teary eyed, but I thought of V for Victory, V for 5 kilometres and V for very much missing my pops today.

Mr JCR arrived at the agreed Victory Arch and walked me home for bubbles on the balcony as promised. My pops would very much have liked that touch – Mr JCR making sure I never walked alone.

Not today – frankly couldn’t be bothered, will pick it up next time