And here we go again, back to normal routine after the Rainbow challenge at the weekend, and having seen everyone else’s efforts I feel slightly ashamed at a pathetic 2.6kms contribution.

Lockdown has meant an improvement in fitness, but evidently not that much and like many other folks we have a  ‘to do’ list of mini improvements to make to mind, body and home.

Number one – no snacks – well it depends what you call snacks. Does cheese count?

Number two – cut down on alcohol – work in progress, we have socially distanced cocktails tonight and tomorrow

Number three – do some much needed re-decorating – another work in progress. Mr JCR commented after my first attempt using a mini roller, that it wasn’t a great idea as you could see paint streaks when looking from certain angles. He was absolutely right, no worries – a second coat would be fine and just make the wall look smarter. Second attempt wasn’t that much better as the bigger brand new roller had a flaw in it, which meant we had a ‘pattern repeat’ of rough spots on the wall that you could still see when the sun shone…. That means buying another roller, the recommended roller can take up to 7-10 days to arrive and it’s not available from general DIY places. Number three is in danger of being constantly deferred, not least because I’m losing the will to get it done.

Number four – get a list of admin tasks done, which includes number three as above, you can see already the flaw in number four!

Having limited myself on the snacking yesterday, and Monday is a no alcohol night anyway, today was all about setting a good routine, and I was aiming to run for 40 minutes solid and going for a greater distance than 5kms. No excuses allowed, not even dodgy rollers…

The sun was shining strongly and I set off seeking shade, my first km was under 7 minutes – not great but faster than a few weeks ago. Then I got my own ‘pattern repeat’ of rough spots, second kilometre really slow, for no apparent reason and then I was back into my stride for km number three, pootling around the City.

The City is still like a graveyard, save for the occasional clatter and bang from some building sites, my right hip giving me some gip, which I think maybe due to going up and down the mini – steps for the unsuccessful decorating. Willing my hip to keep quiet and not mess me about, I made my towards Islington’s Upper Street.

I used to go fish running regularly, but usually in Winter, when I could carry it in my sweatshirt pouch, it’s not quite so convenient to wear a sweatshirt in this heat, so my aim was to get to the fish shop and finish my run there, whatever the distance. But I failed, I was really, really hot, I’d long since run out of water and the last part of the run was in full sun, so instead of doing a 6km run, I managed just about 5.5km. On the up side it’s more than the 5km  and I want to get back up to 10km as my standard run. I’ll never be a  Usain Bolt but if I can go the distance I will be happy.

At the fish shop my NHS Responder Volunteer App went off for the second time today (first time aborted as the ‘client’ didn’t respond to my three attempts to contact them). I accepted the call, thinking I was only about 20 minutes from home anyway and could help out. And another epic fail, this time the client was in Boston, Lincolnshire. I duly phoned the volunteer helpline, to tell them again that for whatever reason my location and the client’s location weren’t being matched correctly.

It’s a known bug in the system apparently and it’s beginning to bug me. I have yet to help anyone, I’ve taken umpteen calls, spanning the UK. I told the woman that whilst I could drive to Boston to help out, the police may take a dim view and I didn’t want a Dominic Cummings press conference to explain myself! She laughed and said they didn’t know why the bug worked this way and a fix is imminent, but that yes, she could see I’d had more than my fair share of ‘failed’ calls. So it feels ‘fishy’ , how come it’s always me?- Mr JCR is on the same app and he has at least had calls in London, albeit not so local, but at least he’s done some.

Me and my fish (monkfish) made our way home, I was hot and a bit peed off that I hadn’t managed the six kilometres, and I hadn’t seen anything of interest to snap. I meandered through Fortune Park, where my fortunes changed – one flowering plant, a bit hot and bothered like me, but it was blooming.

So there you go  a flaw in my paint roller, a flaw in my running plan and a flaw in the Volunteer app. It’s a pattern repeat of rough spots, but the sun was shining, and I did go out, and I did do better on distance, so it’s not totally floored me.

Yup, but focussed today just on the right hip

Best song – Is Vic There? He wasn’t and if he was a client of the NHS Volunteer App, I bet he’d have lived in Inverness anyway. 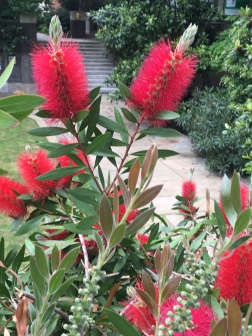 Purple Rain hadn’t yet come on 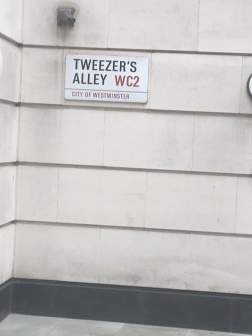 Is this a hint, that lockdown is impacting me?

The last run of week 10 beckoned and I was faffing. Get ready, add the shopping bag to my running shoes, because today is a fish run. Put the laundry on, take the rubbish out, chat to the concierge, strut on my warm up walk. Flash of panic, I can’t recall locking the apartment door, a run back to the block, check the door, it was fine, start the warm up strut again, slightly pinker in face than when I’d started.

Not so much JCR as Jan Can Panic, after being Jan Can Prevaricate.

On my second attempt, I decided just to run where my legs would take me – minimum 30 minutes or 5km whichever was manageable. It was very muggy and I was being covered in thrips whilst running. Particularly gruesome when they go in your mouth. Ugh.

I decided to head up West a bit via Holborn and the Inns of Court area, it’s usually quiet here and I was listening to my colours playlist, which has a reasonable number of His Purple Highness’ tracks – I’d got through Little Red Corvette, Raspberry Beret and Cream by the time I saw even more lovely flowers near St Pauls.

My favourite track is on this playlist is Purple Rain, but stubbornly His Purple Highness refused to play ball. My running mate Mummycav has the most fantastic pair of new red trainers and I thought of her taking them out for the inaugural run when Elvis Costello came on, singing Angels Wanna Wear My Red Shoes. I was aiming towards The Strand and took a little diversion and came across my final pic.

I don’t know if it was a lockdown hint, but like most people my ‘standards’ have taken a tumble during these past couple of months. From my hair being immaculately coloured and cut every 4 weeks, to a a badger stripe of roots having to be cunningly disguised with L’Oreal’s magic spray. Maybe I need to also look at the old eyebrows and see if they need sorting too, if so Tweezer’s Alley is the best place to do that work al fresco.

A couple of weeks ago, whilst running around the City I came across Whalebone Court, and I thought then I may need that kind of corseting to get back into pre Corona belly shape. So whilst London’s gardens are ablaze with colour and in their prime, I find my self needing hair colour, an eyebrow shape and looking less than sublime.

Maybe a virtual shopping trip run is necessary for me to improve my wardrobe and grooming, that could be a good theme for next time out maybe. I feel a running plan coming into being.

The 5kms were done but it was a struggle to get going in the warmth of mid-day. Note to self, get up earlier!

Best track Purple Rain, even though His Purple Highness waited until I’d got back into the apartment.